Summer has made it to the Bay Area! Or, at least summer took a day trip to the area on Saturday. After a fairly cool week, Saturday had clear blue skies and temperatures in the mid 80’s… It was perfect weather for a trip to the coast.

Since moving to the Bay Area in 2009, I have become a custom to the large fluctuations in temperature that are quite common here. I routinely leave the house in the morning with jeans and a jacket only to wish I had a T-shirt and shorts in the afternoon, then get left out in the cold again at the late hour of 5PM. I’ve gotten used to this, but not this Saturday. 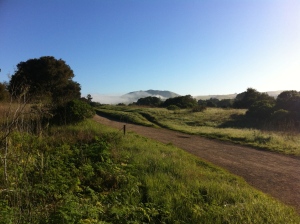 Looking down the Bear Valley trail

I walked out of the house at 6:30AM in shorts and a light shirt… it was in the 60’s! Much warmer than the usual morning. We arrived at Point Reyes a little after 7:30AM and I started the hike off in shorts and T. Warm weather, a day pack, hiking in Chacos, this was quite a contrast to the multi-day winter trips I had been taking the last few months.

We started up the Bear Valley trail for 0.2mi before turning onto the Mt Wittenberg trail. It was 1.8mi to the summit (1,470 ft). The trail climbed quickly to a small meadow where the summit trail splits off. The summit was another meadow nestled in the trees (not much of a view).

After summiting the mighty Mt Wittenberg, we continued another 0.4mi to pick up the Sky trail towards Woodward Valley (0.8mi). The trail up to Woodward Valley was wide and fairly well maintained. It was also inhabited by several large Banana Slugs.

One of the many Banana slugs crossing the trail. This guy was a good 6 inches long!

Making the turn onto the Woodward Valley trail, we found ourselves hiking in and out of stretches of trail overgrown by grass and brush (This would have been a nice place to have long pants). The trail descended the ridge about 2mi to the shore, winding its way through the section of the 12,000 acres of wilderness consumed by the Vision Fire in 1995. The new growth was thick, but remnants of the forest  poked through.

After descending to the coast, we hooked up with the coast trail. This lead us south, winding along the edge of the cliffs for 3.7mi, providing stunning views of the Point Reyes coastline stretching off into the distance. The sky was bright blue and cloud free, but the fog could be seen sitting just above the water a few miles out. It was now about 10:30AM and the sun was quite warm. The gentle breeze coming off the ocean made the temperature quite pleasant.

Heading south on the Coast trail

A little lizard looking good for the camera

The trail alternated between wide, rocky stretches and thick over grown areas. In several of the over grown sections I came very close to stepping on snakes. They seemed a bit camera shy, as they darted into the grass to quick to snap a shot, but they were black with a yellow stripe running their length making me believe them to be a type of garter snake. While the snakes were camera shy, I did catch a lizard striking a pose… 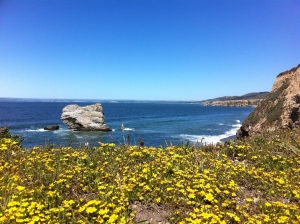 We made it to Arch Rock at about noon, and stopped for a long lunch. The breeze had died, and the sun was beating down from high in the sky. It was definitely time for more sunscreen. We grabbed a spot up the cliff from Arch Rock to get away from the crowd. I spotted a sea lion bobbing in the surf below and we enjoyed a brief visit from a mountain beaver, but he pilled dirt in front of his tunnel opening when the cameras came out. 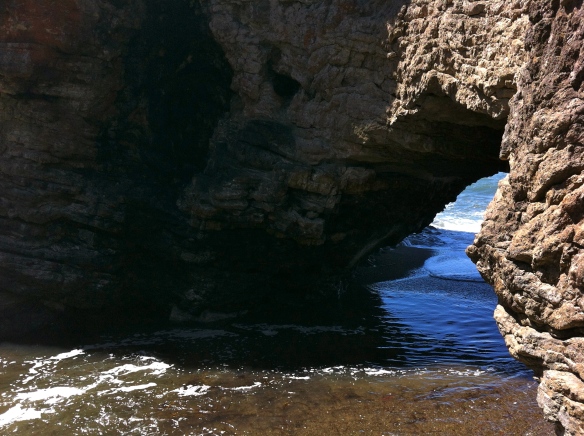 After lunch, we backtracked up the coast trail about 0.5mi to pick up the Sky trail. This brought us back up the ridge for 4mi where we followed the Meadow trail 1.6mi down to the Bear Valley trail. The Meadow trail was probably my favorite stretch of trail. It was wide and shaded, winding its way through the trees to the valley. A nice change from the exposed and sometimes densely overgrown Coast and Sky trails.

Once on the Bear Valley trail, it was only 0.8mi back to the car. Here, we were in the company of the large crowd that had been drawn outside by the beautiful weather. It was a great day for a hike.

It was now about 4:30PM, and with about 16mi of hiking in our legs, we made our way south on Highway 1 to Bolinas to grab a beer at Smilies Bar. After a beer and a short walk through town, it was back to the East Bay for a shower… I hope there will be more days like this coming our way!