To the southeast of Yosemite National Park is the Ansel Adams Wilderness. Named after a man known for his black-and-white photography of the Sierra Nevada, this region marks the northern end of the High Sierra. With summer coming to an end, Paul and I set out on a 5 day expedition into the wilderness to climb Mt. Ritter (13,149ft) and Banner Peak (12,936ft).

Leaving the Bay Area after rush hour gave us a fairly uneventful drive down, at least until we reached Tuolumne. Rolling through on Tioga Pass at 10:30pm behind the only other vehicle on the road, we suddenly had lights flashing behind us. A park ranger got Paul for not having a license plate light! After getting a flashlight in the eyes, a brief chat and a warning, we continued on our way.

We had to make a quick stop in Mammoth Lakes to grab our permit before heading to the campground at the trail head in Silver Lake. The rangers had left our permit with a warning that there had been a lot of bear activity reported in the area, especially around 1000 Island Lake. We didn’t think to much of this as we made our way to the campground until we came up on a bear taking a midnight stroll across the road!

We rolled into camp shortly after midnight and were treated to a light show by the storm clouds circling the valley. It was quite the site!

Packed and ready to go under a gray sky

It rained through the night and I awoke shortly after 6am to the sound of a generator. The park’n pitch campground we had pulled into was largely populated by RVs and our neighbor was apparently an early riser. With wet grass and puddles all around, we pilled our gear into the car and headed to the trailhead parking lot to repack and get on the trail.

We started up the Rush Creek trail shortly after 8am and immediately began to climb a fairly steep grade. The trail criss-crossed the tracks for a cable tram that went strait up the side of valley to the dams that created Agnew and Gem Lakes. There was no cable on the tracks and I wondered if the tracks we still used.

As we neared Agnew Lake, we began to hear sounds of hammers and drills. Agnew Lake had been drained for repairs to the dam and the cable tram was how supplies were carried up from the valley below.

We continued past Agnew Lake towards Gem lake. The clouds had cleared, and we hiking under a brilliant blue sky.

As we crested the ridge at Gem lake, we got our first glimpse of the High Sierra!

Our first look of the High Sierra from Gem Lake

Continuing around the lake, we found a place to grab lunch. It was about noon, and we had climbed about 2,000ft… it was a well deserved meal.

Dark clouds rolling in over the Clark Lakes

After lunch we turned away from Gem Lake, and continued to climb towards Clark Lakes, a group of several small lakes at 9,800ft. It was now around 2pm and a layer of dark clouds had moved back in. We decided to pick up our pace a bit incase these clouds were bringing another evening of rain.

Just past the Clark Lakes we crossed our first pass of the trip at ~9,900ft. From here we got our first look at the reason we had come into the wilderness… Mt Ritter and Banner Peak. They rose high in the sky seeming to punch a hole in the gray clouds above. 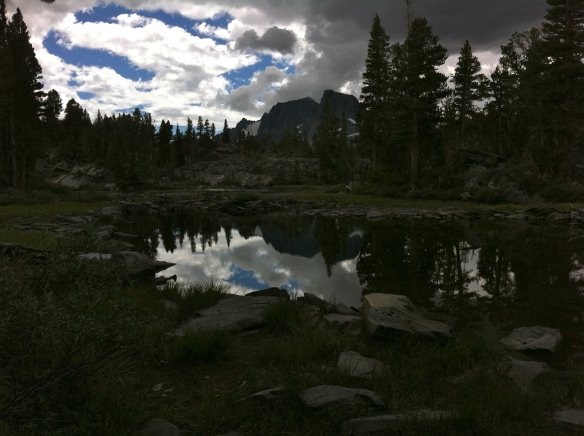 About an hour later we arrived at 1000 Island Lake. As we stood looking over the lake at the Ritter Range towering in front of us, we realized we were standing in the same spot Ansel Adams had stood almost 90 years ago! (His photo can be found here)

We made our way around the northern edge of the lake and set up camp on a rocky ridge that gave us a great view of Banner and the lake. It was not quite 4pm, and having gone from sea level to 10,000ft in under 24hrs, I was exhausted!

After a short nap on a warm rock, I began to get my gear situated for the night. While doing this I discovered I had developed a rather large blister on my left heel. This was a bit of a surprise because I hadn’t noticed any of the warning signs of a blister while hiking… Bummer…

As we sat in camp, we watched several more groups arrive behind us. Farther up the shore we could see a group of 8-10 tents. We wouldn’t be alone in the mountains tonight, but at least there was plenty of space and, best of all, no generators!

As evening began to settle in, it was time for dinner. I had hoped to make a couple backcountry pizzas on this trip, but the fire danger in the Sierra was at the highest level in over 20 years making it unsafe to light up my twiggy fire. Instead I used my Fry-Bake to whip up an excellent dinner of stir fried rice in the shadow of Banner Peak!

Over 3,000ft of climbing had made for a long first day, and by 8:30pm it was time for bed. The next day we would be heading 7.5mi to Ediza Lake where we would set up base camp for climbing Ritter and Banner.

8 thoughts on “Into the Wilderness”