Check out the 1st part of this trip HERE

Saturday was going to be an easy day. We were only going 7.5 miles to Big Flat and didn’t have to cross any sections that were dependent on the tide. I woke up at 7am as the sun was starting to show over the ridge. The morning was cool, but the night had been warmer than the previous one.

I wandered down to the beach to watch the sunrise and snap a few pictures. On the way back to camp I grabbed the bear canister to make some breakfast. Paul and Charles had yet to emerge from their tent, but it wasn’t long after I started fumbling with the stove that they crawled out.

The low morning tide had revealed some large rocks covered in mussels. After a trip to the beach, Paul returned to camp with a half dozen of the little guys filling his pockets ready to cook up for breakfast. They weren’t gourmet restaurant style, but they weren’t half bad…

We rolled out of camp at about 9:30am taking an easy pace down the beach. It wasn’t long before we realized we were following the tracks of a bear, and since the tracks were below high tide line, we figured we must not be far behind!

We stopped for lunch by Kinsey Creek, where we were passed by a couple, also on their way towards Big Flat. After lunch, the trail took us slightly inland over a ridge giving us a spectacular view of the trail stretching down the coast. 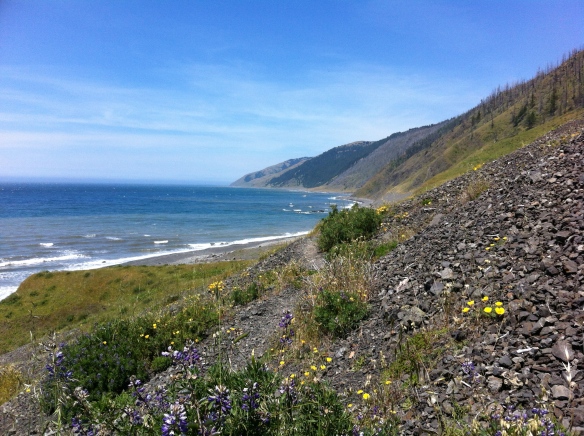 Walking down the dirt landing strip towards Big Flat

As we neared Big Flat, the trail took us down the middle of a dirt runway that was the access for a small cabin. It was a good thing no one was trying to land, because it would have had us diving off into the grass!

We got to Big Flat camp about 2PM. The couple that had passed us during lunch was sitting across the stream behind some bushes. We made camp a short ways up stream, just above high tide line. 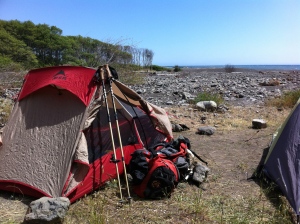 The rest of the afternoon was spent exploring the surroundings and working on our tans.

Throughout the afternoon, several groups strolled by, but none stopped for the night, even the couple that had been there when we arrived eventually moved on, leaving the whole area to us.

After dinner we took in another amazing sunset, followed by some  stargazing by the camp fire.

Looking down the beach at low tide

I woke up at 6am. Low tide had peaked at 5:55am, and we had 6 miles to cover before high tide. Based on how quickly we had been moving, we planned on leaving camp by 7:30am.

The first hour of hiking was well out of reach of the tide, but after 2 miles, we climbed down a short cliff onto a stretch of beach that would definitely be underwater at high tide… 20ft cliff to the left, ocean to the right, and not a lot of room in between.

This stretch continued a ways before opening up a bit were we crossed two streams where the other groups had set up camp. They were all just starting to break down their camps, having opted for the hike farther-sleep later plan…

Fog over takes us

By 10am we had cleared the high tide section. We were well ahead of schedule, so we stopped for an early lunch with only two miles to go.

On the final stretch the fog rolled in giving the beach an erie feel. This was definitely Bigfoot weather!

By the time we reached the car, the fog had cleared and we headed back north to retrieve my car. This time we avoided King Peak Rd.

Back at the Mattole River, we hung out on the beach for a bit waiting on a very special show… This afternoon was the annular eclipse! As the moon moved into position, and the light from the sun dimmed, a thin layer of clouds moved in providing the perfect filter for viewing the eclipse, and allowing Paul to take some pretty awesome pictures! What a treat!

Check out more photos from the trip on Flickr!